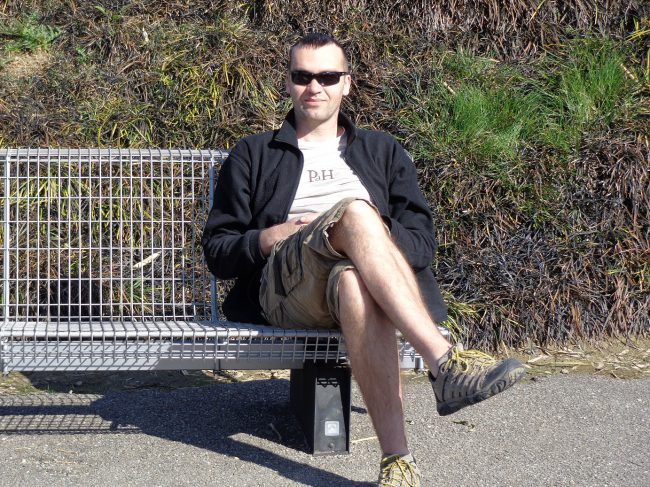 Matjaž is at Ourspace since the last century, what am I saying, from the last millennia. How cruel this may sound, but it’s not that bad. Well, it brings quite a few kilometers in experience, many drunk coffees, teas, juices a bit more than the latter, I guess. But, as he says himself, always starting from the beginning and anew. Everything is changing all the times, things get supplemented, get better, so you have to be on track and follow the latest trends, follow. You have to learn and build. Be. It’s never boring. About his experience he tells that they mostly come in handy, but sometimes they can be dangerous, because you fear doing new things and rely on the already learned. But it’s also good, because the team consist mostly of younger and long-lasting young personnel. Working together in such a team-based field is extremely important, although there is no 100% overlapping teamwork, it consists of many lanes, where they meet, supplement and think together.   Matjaž finished his secondary school of electric engineering, later the same with the faculty and then his work. He says that his career isn’t much, but therefore it consist of a lot and constant education for keeping and broadening his already acquired knowledge and to upkeep his certificates. Working hours are the usual, but I want to know if he has any night-shifts. “I don’t work at night, but there is some work in the evenings, where there can be some interruptions because of the users, you have to adjust to the customers. Sometimes I work on the weekends, but not that frequently.” That was the only singular he used.   He also spoke in the Slovenian dual. “We love to travel, my kid is 10 years old so it’s a bit harder to do this outside of the holidays. We love Italy, but we also went to the Mediterranean countries, during the holidays for the 1st of May, during the main holidays not so much, because the roads are too crowded. We also like to go somewhere near water, we like Sardinia, in the summer also the Dolomites. In the winter we go to the Mediterranean, but also skiing. During the week I mostly go for a walk with my wife.”   About his hobby’s and his free-time at home. “I really don’t read books, because everything is on the web. Let’s make a deal and say that this kind of reading is considered real reading. Movies, yes, I like to watch Discovery and Travel channel, but mostly the TV is on as a background noise – I always have to do something about my caravan, craftsmanship, I have to do something with my hands from time to time, so it’s not all just virtual.”   About the social networks, he tells that he is aware of how it works and what they do, but it’s important to him that he doesn’t spend his free time on the computer. And he asks me if I wanted to give my pictures to the stores Mercator and Spar for their noticeboard. A discussion of information-flow follows and he tells me how he thinks that there is too much data and that it’s not qualitative enough. “The problem is that all that is written down counts as credible information. Illustrations – the title of some newspapers are misleading, but you just have to read it no matter what.”   And because Matjaž had a bit more past in his life than the other co-workers, I want to know what he thinks he will be doing in 10 years. “I haven’t thought about it, I hope the same as now, I want that. But it’s not just up to me.” And so he returns to here and now again. “I love doing what I do, it’s so interesting and it gives me my energy back.”

Born in the right year and outlived everything that happened in Trbovlje and around in the last 60 years and some more, also studying and working in Ljubljana, but as a daily commuter. Now retired. Never surrender! I am a co-worker of some movies and such things. Let’s say, biker-specific things. And Father Christmas, when the time comes. Red cross. Worked in institutes such as Delavski dom Trbovlje, a voice of the radio station Rock radio every Sunday at 20.00 pm and in the OSAP Hive with newest features at Fridays.