February 9, 1964. A date that probably doesn’t mean that much to the average European. But in America, it’s one of those days that changed everything…especially for me. That Sunday night was the first time America got a good look at a band from Liverpool, England called The Beatles. Their hit single “I Want to Hold Your Hand” was at the top of the charts and the country was gripped in what the English press dubbed “Beatlemania” a year earlier. At that moment, music and popular culture changed forever. 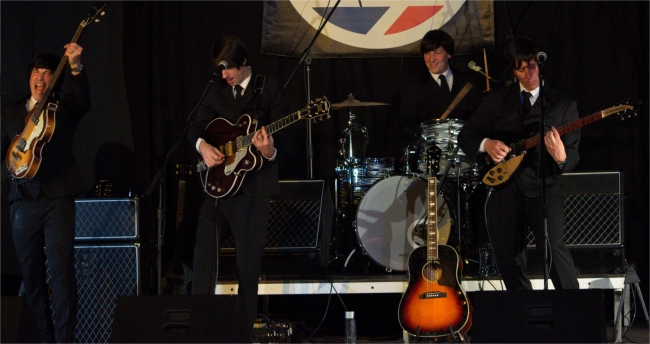 At the time, America was still trying to cope with the national tragedy of the assassination of President Kennedy. When The Beatles arrived at the newly named JFK Airport in New York City, a nation seemed ready to move on. Mass hysteria swept the country. And not just young female teens. I should know, because at the time I was a 5-year-old boy living in the suburbs of New York. Northvale, New Jersey to be precise. My earliest musical memories are of hearing “I Want to Hold Your Hand” and many other Beatles’ songs on a tiny, portable Motorola radio. Those songs and the impact they had would stay with me for the rest of my life. As luck would have it, my father was a 7th and 8th grade math teacher. He was only 30 years old when Beatlemania swept through his classroom. He was young enough (and hip enough) to appreciate the new sounds that his students were listening to. So, through the course of the year, my brothers and I were treated to “Meet The Beatles”, “The Beatles Second Album” and “Beatles ‘65”. Oddly enough, none of those albums were released in Britain (or Europe for that matter). They were all compiled for the American market. A country desperately trying to catch up with what England had discovered a year before. I suppose you can say I never recovered from that glorious year. As the years passed, I continued to rediscover The Beatles and their music. By the time I was 15, I began to play the bass guitar and started a band with one of my brothers and some school friends. And throughout, through all the bands I performed with over the years, The Beatles were there looming over me. Oddly enough, it wasn’t until 2013 that the thought of performing in a Beatles tribute band presented itself to me (ah, but that’s another story). Suddenly, I was in the role of my hero, Paul McCartney, in HELP! A Beatles Tribute and performing Beatles’ music for people of all ages throughout Europe. Through the coming months, I will share some of the experiences I’ve had and the love affair (I can’t think of a better way to put it) I’ve had with The Beatles for over 50 years. So, until the next installment, peace and love. Ernie Mendillo

Ernie Mendillo (born October 23, 1959) grew up in New Jersey, U.S.A. He began playing bass guitar at the age of 15. He graduated from William Paterson University in 1982 with a degree in communications. Throughout, he continued performing in bands in the New York area. In 1985, he co-founded The Brandos. The Brandos achieved commercial success in the United States in 1987 with the release of their first album, Honor Among Thieves and the single “Gettysburg”. During this period, the band began touring the U.S. and Europe, opening for well-known bands such as The Georgia Satellites, INXS, The Cars and The Alarm.